I wanted to share this great book I bought yesterday.  I’ve been trying to teach my oldest son calming techniques, as he seems to become very emotional very quickly so he’s past the point of being able to “check” himself.  We’ve been working on yoga, meditation, and taking “lion breaths”.  He’s enjoyed the yoga moves up to this point, but as I am not an experienced yogi, our “sequences” have been pretty broken and disorganized.  We’ve done five lion breaths at the end of each session to practice meditation, but overall, he’s so silly during the exercises and meditation that it hasn’t really resulted in much calming. 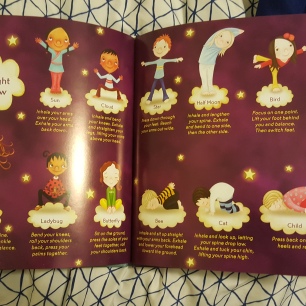 When I saw this at Barnes and Noble I knew I had to buy it.  The pictures are beautiful, the sequence is simple, and the fact that it’s a bedtime story makes the yoga all the more appealing.  Daniel wanted to do it twice last night, and the first thing he asked for this morning was to do yoga.  We even successfully did three sets of five lion breaths last night.

I’ve seen Family Binders and thought they were a great idea, but as an single parent I didn’t really need one for meal planning and the kids’ doctors’ number.  I’ve designed one that suits our needs, kind of an organizational tool and kind of Pinterest in physical form.  We used a lot of papers from this list of organizational tools.

The Goals section includes anything goal related.  I have several blank goal sheets for what crops up during the year, goal sheets for checking of scriptures read, and our reading lists for Daniel.

Our schedules sections have a couple of different organizers.  I ended up just buying a daily agenda to go with my weekly one.  I have one that has a section for each of my activities (Family, Blue Goose Charity Organization, Work, Personal), one I downloaded from the previous link that tracks water intake, chores, and menus. I also keep a couple of blank monthly calendars where I write in doctor’s appointments, birthday parties, and tentative playdates, as I have a tendency to overbook.

The financial section includes my budget, any bills that are on a payment plan (Alex’s hospital bill-finally paid off this month!), and my most recent credit reports.

The food section holds recipes I’d like to try and lists such as non-processed snacks and healthy go-to meals.  I may try more formalized menu planning, but I’ve truly never had a problem budgeting groceries, planning meals, using leftovers, etc.

The work/school section includes any documents related to those.  As I will be job hunting if we move this fall, I’ll keep a resume there. School documents include my transcripts.

The homemaking section is supposed to include a cleaning schedule.  It’s empty at the moment.  The intention is there.

The spiritual sections are lessons or printouts along spiritual lines.  For instance, I have a list of verses I’d like to memorize as well as ones that are appropriate to children.  I have a couple of learning packs and printouts that have Biblical themes.  These include lessons from Confessions of a Slacker Mom as well as folder games from Finch Family Games. FHE is a concept I kept from when I was Mormon.  They do a weekly Family Home Evening that includes a lesson that accommodates your family’s abilities and needs, an activity that promotes family bonding and growth, and a snack.  I keep ideas for FHE and FHE snacks here.

Preparedness includes information and planning for creating 72 hour kits and food storage and other emergency prevention solutions.  This is also something I held onto from Mormonism.

The final section is my Word Study section.  I’ve seen this idea in a few places, some more religious-study based and some  less so.  The word I picked this year was Peace.  Honestly, I haven’t even touched it yet.

I have already found the binder coming in handy for passwords, calendars, and storing ideas.  It’ll be an organic system, growing and changing as our family requires.

My son, like many others, has taken over my phone and IPad.  I swore when I had kids I was never going to let them tune into electronics, but I realized the other day the best way to get my phone back may be to give Daniel his own tablet.  I was initially going to buy the LeapPad because we’ve had luck with the LeapReader, but my boyfriend told me about the Nabi Tablet he bought for his kids.  We got it in the mail yesterday from Amazon, and I fell in love immediately!

My inclination to get the LeapPad was because I thought Daniel would like the character-based games.  I chose the Nabi because it was something he could grow into.  The Nabi is essentially just a kid-safe Android tablet.  There are two formats: Nabi Mode and Parent Mode.  In Parents mode, which is password protected, there are all of the features of an Android and apps to control your kids’ settings.  Nabi mode (Kids’ Mode) shows any apps you’ve allowed them to have access to as well as their Wings learning curriculum and KoozUniversity learning games. So far, in a day, this is what I’ve discovered:

-I got the Nabi 2S for a little over a hundred dollars with Amazon Prime.

-You can make a separate account for each child to control settings individually.  This allows them separate curriculum in Wings University and separate rights.

-There is a chore chart you can set up in the Parent Mode; it’s visible in Nabi mode but can only be managed in Parent Mode.  Parents can set up coin rewards for every chore that is checked off.  Coins are then used to purchase games from the Treasure Box in Nabi Mode.

-Parents can limit time allowed on the Nabi as well as set curfews for certain times.  I didn’t consider the curfew at first, but this will come in handy to keep Daniel from sneaking tablet time after bed time.  Kids can earn more time by spending time on certain apps.  For instance, if Daniel spends 30 minutes on one of the learning apps, he can earn 30 more minutes to his 1 hour limit per day.

-Parents can view how much time is spent in each app.  They can also view progress from some of the learning apps.

-Daniel really enjoyed Wings University.  We are only at the beginning, so I don’t know if there is a subscription down the road.  I did have to purchase “learning paths” for him, but I did that before really exploring what they had (enthusiastic).  As they progress, they earn stars, badges, and coins.

-As your kid grows up and you allow more and more rights, it essentially becomes a regular tablet that you can monitor.

-It is very durable.  You can tell it was made well and can withstand some beating.

-The coins cost real money.  Daniel was so excited for “nickels” that I caved and spent $9.99 on 300.  They’ll last awhile, though, because he only gets 2 per chore.

-We both loved Wings University, but the KoozUnversity, which has separate apps for different subjects, was way beyond Daniel’s skills.  We chose the Kindergarten level, but it expected him to be able to read instructions that were beyond Kindergarten reading and understand content that was past his age.  For example, the first lesson in science has a page for kids to read about products of matter with a list of what is made of what. Then, he’s expected to look at group of pictures and choose what they are made of.  It will be useful when he is older, but until he can read it’s not going to help us.  Also, KoozUniversity requires an annual subscription, though it’s not expensive at all.

Has anyone else tried Nabi or another kids’ tablet? Let me know your thoughts!

Bringing all the pieces together

Inspiration For Learning and Life.